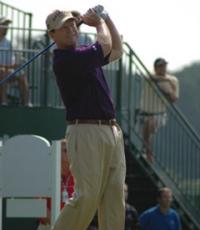 He is a member of the World Golf Hall of Fame; He won eight major championships on the PGA Tour; He was a six time PGA Player of the Year
Fee Range: $75,000 - $100,000
Secure Tom Watson
for Your Event

One of his most memorable wins, was the US Open in 1982 at Pebble Beach. Nicklaus, playing two groups ahead of Watson in the final round, charged into a share of the lead with five consecutive birdies. When Watson reached the par-3 17th hole the two were still tied, but with Nicklaus safely in the clubhouse at 4 under par 284. Watson hit his tee shot on 17 into the rough just off the green. He faced an extremely difficult chip shot downhill on a very fast green that sloped toward the Pacific Ocean. While being interviewed on national television and fully aware of Watson's terrible predicament, Nicklaus appeared confident he was on his way to an unprecendented fifth US Open championship. Watson's chip shot, amazingly, hit the flagstick and landed in the cup, giving him a near-miraculous birdie and setting the stage for yet another win over Nicklaus. Watson went on to birdie the 18th as well, for a final margin of two shots.

He joined the Champions Tour in 1999, the same year he earned an honorary membership of the Royal and Ancient Golf Club of St Andrews in Scotland. In total Watson won 39 events on the PGA TOUR between 1974 and 1998. He has numerous Champions Tour wins, while also winning a number of unofficial and international events.

Secure Tom Watson for Your Event

Based on your interest in Tom Watson as a speaker or for a personal appearance, Direct Sportslink has provided you additional links below for other sports talent with similar appearance fees, speaker topics, and categories that match Tom Watson.