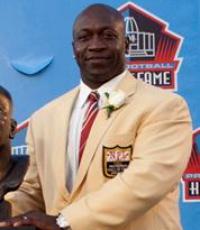 He was a seven time Pro Bowl selection and six time All-Pro; He is inducted into the College and Pro Football Hall of Fame
Fee Range: $10,000 - $20,000
Secure John Randle
for Your Event

Randle went undrafted but was picked up by the Minnesota Vikings during training camp, playing his first season in 1990. He went to his first Pro Bowl in 1993 after recording 11.5 sacks, and was quickly becoming one of the dominant defensive tackles of his era. Randle would record double digit sacks during eight different seasons, including a career-high and league-leading 15.5 sacks in 1997.

Randle had an ongoing rivalry with Green Bay Packers quarterback Brett Favre, whom he sacked more than any other quarterback; Favre said that Randle was the toughest defensive player he faced and "on artificial turf he's unblockable".

At the end of the 2000 season, Randle signed with the Seattle Seahawks, and retired in March 2004. While with the Seahawks, Randle acquired his final sack. Over his career he was named to seven Pro Bowl squads. He was named All Tackle Machine of 1999 by Tackle: The Magazine.

Secure John Randle for Your Event

Based on your interest in John Randle as a speaker or for a personal appearance, Direct Sportslink has provided you additional links below for other sports talent with similar appearance fees, speaker topics, and categories that match John Randle.