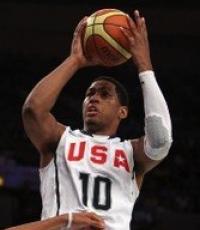 Granger started his collegiate career at Bradley University where he played the 2001–02 and 2002–03 seasons. After the 2003 season, he transferred to the University of New Mexico, where he began playing during the second semester of his junior season in 2003–04. In 2004–05, he became the first player in school history to get 60 assists, 60 blocks and 60 steals in a season. He won the Mountain West Conference tournament MVP and led the Lobos to the NCAA tournament.

Granger was selected 17th overall in the 2005 NBA Draft by the Indiana Pacers. In his first NBA season, Granger played in 78 regular season games, averaging 7.5 points and 4.9 rebounds per game, while making the All-NBA Rookie Second Team. He added 8.2 points and 5.2 rebounds in 6 playoff games.

In 2007–08, Granger led the Pacers in scoring for the first time, averaging 19 points per game, while starting all 80 games he appeared in.

On October 31, 2008, Granger and the Pacers agreed on a 5-year contract extension.

Secure Danny Granger for Your Event

Based on your interest in Danny Granger as a speaker or for a personal appearance, Direct Sportslink has provided you additional links below for other sports talent with similar appearance fees, speaker topics, and categories that match Danny Granger.