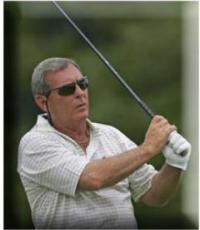 He is one of the elder statesmen in professional golf; In 1979, he became only the third player to win The Masters in his first appearance
Fee Range: $50,000 - $75,000
Secure Fuzzy Zoeller
for Your Event

In 1979 Zoeller became one of only three golfers to have won The Masters in his first appearance in the event. His other win in a major championship came at the 1984 U.S. Open.

Zoeller joined the Champions Tour in 2002 and won a senior major, the Senior PGA Championship that year. He also won the 2004 MasterCard Championship.

Secure Fuzzy Zoeller for Your Event

Based on your interest in Fuzzy Zoeller as a speaker or for a personal appearance, Direct Sportslink has provided you additional links below for other sports talent with similar appearance fees, speaker topics, and categories that match Fuzzy Zoeller.