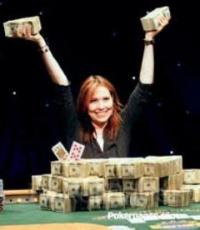 Annie Duke is a strong competitor when it comes to tournament poker. She proves that women can hold their own in a game that is supposedly male-oriented. Phil Hellmuth once stated that Annie is the best all-around woman poker player in the world.

Annie was born in Concord, New Hampshire. She attended school at St. Paul and went on to Columbia where she double-majored in psychology and English. She then attended the University of Pennsylvania where she was in pursuit of a doctoral degree in psycholinguistics. She left the program to begin to play poker. Her brother Howard Lederer taught her how to play and she hasn't looked back since.

In 2010, she won the National Heads-Up Poker Championship, earning a cash prize of $500,000 in addition to the title.

Secure Annie Duke for Your Event

Based on your interest in Annie Duke as a speaker or for a personal appearance, Direct Sportslink has provided you additional links below for other sports talent with similar appearance fees, speaker topics, and categories that match Annie Duke.