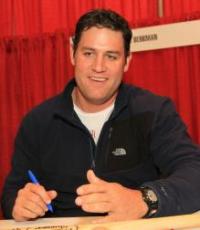 Direct Sportslink's client, The Woodlands Church, was looking for a reputable christian speaker willing to share their testimony about life and faith. Having just won the World Series as a member of the St. Louis Cardinals, Lance was so gracious with his time and our client was thrilled with his interview. The interview was broadcast throughout their weekend service.

Throughout his college career at Rice University, Berkman batted a collective .385 with 67 home runs and 272 RBI. His 41 home runs in 1997 ranked third-most in NCAA history. That year he also made the all-time record book in RBI, slugging percentage, and total bases while leading the Rice Owls to their first College World Series appearance.

He was named the 1997 National College Player of the Year, playing for the legendary Wayne Graham, as well as named a first team All-America by Collegiate Baseball Magazine, Baseball America and The Sporting News. He was invited to visit the White House and dine with President Clinton along with the rest of the Baseball America honorees.

He was a key member of the 2011 World Series Champion St. Louis Cardinals team. He was named 2011 NL Comeback Player of the Year. Berkman has been very outspoken about his Christianity throughout his career. Direct Sportslink secured Lance Berkman for a christian church in Houston, Texas for a christian service video used during the church's weekend services.

Secure Lance Berkman for Your Event

Based on your interest in Lance Berkman as a speaker or for a personal appearance, Direct Sportslink has provided you additional links below for other sports talent with similar appearance fees, speaker topics, and categories that match Lance Berkman.