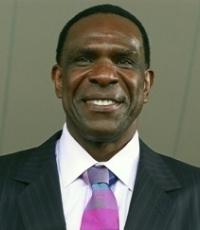 Dawson was a center fielder until knee problems – worsened by the artificial surface at Olympic Stadium – forced his shift to right field, followed by his move to a team which played on grass. He led the NL in outfield putouts three consecutive years (1981–1983), and won eight Gold Glove Awards for fielding excellence. Upon his retirement, his NL totals of 409 home runs and 962 extra base hits both ranked tenth in league history; he also ranked seventh in NL history in games as an outfielder (2,303), and sixth in both outfield putouts (5,116) and total chances (5,366). He set Expos franchise records for career games, at bats, runs scored, hits, doubles, triples, home runs, runs batted in, extra base hits, total bases and steals, all of which have since been broken variously by Tim Raines, Tim Wallach and Vladimir Guerrero. Dawson was inducted into the Baseball Hall of Fame on July 25, 2010.

Secure Andre Dawson for Your Event

Based on your interest in Andre Dawson as a speaker or for a personal appearance, Direct Sportslink has provided you additional links below for other sports talent with similar appearance fees, speaker topics, and categories that match Andre Dawson.