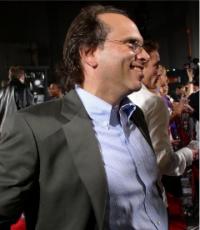 While writing for The Philadelphia Inquirer, Bissinger won the Pulitzer Prize for Investigative Reporting for his story on corruption in the Philadelphia court system in 1987.

His magazine work has also appeared in the New York Times and Sports Illustrated. His most recent article for Vanity Fair, "Gone with the Wind" about the saga of 2006 Kentucky Derby Winner Barbaro, has been optioned by Universal Pictures.

He is perhaps best known for his book Friday Night Lights, which documents the 1988 season of the football team of Permian High School in Odessa, Texas. This work went on to become a successful film. The book has sold nearly two million copies. In a list of the one hundred best books on sports ever, Sports Illustrated ranked Friday Night Lights fourth and the best ever on football.

He has written several books in addition to Friday Night Lights, including; A Prayer for the City, which offers insight into the urban political scene of Philadelphia during Mayor Ed Rendell's term in the 1990s; and the New York Times' bestselling Three Nights in August, which chronicles a series between the St. Louis Cardinals and the Chicago Cubs through the perspective of Cardinals manager Tony La Russa.