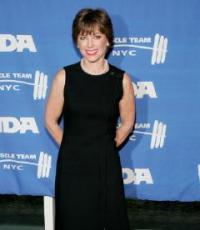 She won an Olympic Gold Medal in figure skating in 1976 and became the female endorsement darling of corporate America
Fee Range: $10,000 - $20,000
Secure Dorothy Hamill
for Your Event

Dorothy Hamill first started ice skating when she was eight. She began skating in her grandparent's backyard on the pond. Her ice skates were too big so her grandmother put stuffing in the toe to make them fit. She asked her mother if she could have lessons so she could learn to skate backwards. Her mother said yes and she learned to be a professional. When she was older she won an Olympic gold medal and the world championship in 1976.

The U.S. champion from 1974 through 1976, Hamill developed a new move, a camel spin that turns into a sit-spin, which became known as the "Hamill camel." The bobbed hairstyle that she wore during her Olympic performance started a brief fad.

On January 4, 2008, Hamill announced that she was being treated for breat cancer (view full ist of cancer related speakers). Following her battle with cancer, Hamill began encouraging people to eat a plant-based diet to reduce their risks of contracting cancer and other diseases.

Secure Dorothy Hamill for Your Event

Based on your interest in Dorothy Hamill as a speaker or for a personal appearance, Direct Sportslink has provided you additional links below for other sports talent with similar appearance fees, speaker topics, and categories that match Dorothy Hamill.