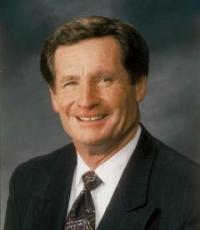 He has been an official for three NFL Super Bowls and ten college championship games
Fee Range: $5,000 - $10,000
Secure Jim Tunney
for Your Event

Nicknamed the "Dean of NFL Referees", Tunney was the first official to be named to the "All-Madden Team" in 1990 and won the "Gold Whistle Award" in 1992 from the National Association of Sports Officials (NASO). He wore uniform number 32 for most of his career, but when the NFL numbered each position separately from 1979 through 1981 rather than assigning one number per official, he wore number 3.

Tunney was a member of Commissioner Tagliabue's Officiating 2000 Committee, and was Vice Chair of the U.S. Olympic Committee for Northern California (Sydney 2000 Games). In 1993, he founded the Jim Tunney Youth Foundation, which supports community programs and resources that work with youth to develop leadership, work skills, wellness, and self-esteem. He wrote a weekly column for the Monterey Herald and is a motivational speaker.

Off the field, Tunney has had a long career as an educator and school administrator, starting out in 1951 as a teacher at Los Angeles' Lincoln High School, later becoming vice principal from 1959 to 1964. He then served as a principal of Los Angeles high schools Fairfax (1964-1970), Franklin (1972), and Hollywood High School (1973-74). He became assistant superintendent of secondary education for the Bellflower Unified School District in 1975 and served as the district's superintendent in 1977. He left education for 16 years before becoming headmaster from 1993 to 1994 of the York School in Monterey, California, joining the school's board of trustees in 1995. He also joined the board of trustees for Monterey Peninsula College in 1997.

Secure Jim Tunney for Your Event

Based on your interest in Jim Tunney as a speaker or for a personal appearance, Direct Sportslink has provided you additional links below for other sports talent with similar appearance fees, speaker topics, and categories that match Jim Tunney.