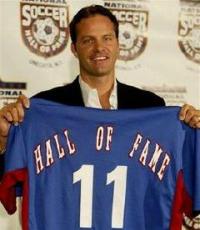 He scored the first goal ever in Major League Soccer in 1996; He was elected to the National Soccer Hall of Fame in 2004
Fee Range: Contact Us
Secure Eric Wynalda
for Your Event

Wynalda grew up in Westlake Village, California. After playing for the San Diego State University Aztecs, he earned his first cap against Costa Rica on February 2, 1990. Later that year, Wynalda played in his first World Cup and then became the first American-born player to play for a Bundesliga club.

One of the first Americans to make a name for himself in European soccer, Wynalda played in Germany for 1. FC Saarbrücken (1992-94) and VfL Bochum (1994-96). In the 1994 World Cup, Eric scored on a free kick as the United States tied Switzerland. He also played in the 1995 Copa América, where he was named to the all-tournament team after scoring against Chile and Argentina.

Wynalda came back to the States in 1996, signing with Major League Soccer and the San Jose Clash. On April 6, 1996 Wynalda scored the lone goal in the league's first game as the Clash beat D.C. United. He was named U.S. Soccer Athlete of the Year that year.

In 1998, Eric participated in his third World Cup, becoming only the third US player to do so. Wynalda retired from the US National Team as its all-time leading scorer with 34 goals in 106 appearances. He was named the Honda US Player of the Decade for the 1990s and elected to the National Soccer Hall of Fame in 2004. After his retiremnet Eric became a TV broadcaster for ESPN. He has since moved to Fox Soccer Channel and Yahoo Sports.

Secure Eric Wynalda for Your Event

Based on your interest in Eric Wynalda as a speaker or for a personal appearance, Direct Sportslink has provided you additional links below for other sports talent with similar appearance fees, speaker topics, and categories that match Eric Wynalda.