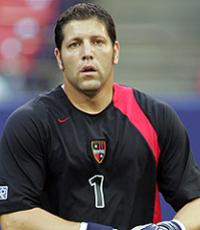 He became one of the most famous U.S. soccer players after his goalkeeper plays in the 1994 World CUp
Fee Range: Contact Us
Secure Tony Meola
for Your Event

Meola made his U.S. National Team debut on June 10, 1988, against Ecuador. After playing in college for the University of Virginia (where he won the Hermann Trophy in 1988 and the MAC Award in 1989), he played every minute in goal for the US in the 1990 World Cup. He repeated that in the 1994 World Cup, when his play and ponytail made him a recognizable face around the country. After a long gap away from the national team after 1994, Meola's return later in the decade vaulted him to 99 caps, the most for a U.S. goalie. He was then a third-stringer to Brad Friedel and Kasey Keller at the 2002 World Cup.

In the early 1990s, Meola had a stint in England with Brighton and then moved back to the U.S., playing for the Fort Lauderdale Strikers of the A-League. He also briefly played indoor soccer for the Buffalo Blizzard of the NPSL. In 1995, Meola played for the Long Island Rough Riders, leading them to the USISL championship. Upon the creation of Major League Soccer, he was allocated to the MetroStars, for whom he played between 1996 and 1998, starting almost every game. Meola was on top of the game during his time there, setting a league record with nine shutouts in 1996. He did not win the MLS Goalkeeper of the Year Award, however, the honor going to Mark Dodd (it has been said that league politics had a lot to do with that selection).

Meola was traded to the Kansas City Wizards (with Alexi Lalas for Mark Chung and Mike Ammann) in 1999, but missed most his first year in the midwest due to injury. In 2000, Tony had an amazing season, being named League MVP, Goalkeeper of the Year, and MLS Cup MVP as he lead Kansas City to the championship. He shattered the league record by recording 16 shutouts.

Meola played for the Wizards through the 2004 MLS season. That year, an injury forced him out of contention. Bo Oshoniyi took over the goalkeeping position, and Meola was not asked back for next season. He was then re-acquired by the MetroStars in June 2005, and played well down the stretch. Meola was named to the MLS All-Time Best XI after the season.

Secure Tony Meola for Your Event

Based on your interest in Tony Meola as a speaker or for a personal appearance, Direct Sportslink has provided you additional links below for other sports talent with similar appearance fees, speaker topics, and categories that match Tony Meola.