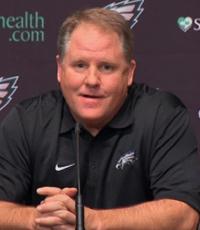 Kelly helped the Ducks gain national attention in 2009 after an upset of the then #5 USC Trojans on October 31. Kelly became the first Pac-10 coach to win an outright conference championship in his first season, sending the Ducks to the Rose Bowl for the first time since 1995. On December 7, 2009 Kelly was named Pac-10 Coach of the year.

In early October 2010, Kelly led the team to a #1 spot on the AP, Harris, and USA Today Coaches Poll, followed a few weeks later by a #1 BCS ranking. Kelly led the Ducks to a 9–0 finish in conference play, winning their second consecutive outright Pac-10 title. In December, following an undefeated 12–0 season and an end-of-season #2 BCS ranking, Oregon was selected to play the #1 Auburn Tigers in the BCS national championship game on January 10, 2011. The Ducks lost, 22–19, on a last-second, 19-yard field goal.

Based on your interest in Chip Kelly as a speaker or for a personal appearance, Direct Sportslink has provided you additional links below for other sports talent with similar appearance fees, speaker topics, and categories that match Chip Kelly.