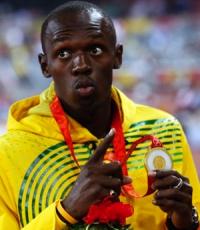 He became the first man in Olympic history (2008) to win both the 100m & 200m in World Record times
Fee Range: Contact Us
Secure Usain Bolt
for Your Event

Usain Bolt is a Jamaican sprinter and a five-time World and three-time Olympic gold medalist. He has broken the world record and Olympic record in the 100 metres, the 200 metres and (along with his teammates) the 4×100 metres relay. He is one of only a select few athletes to win world championships at the youth, junior, and senior level of an athletic event.

Bolt won a 200 m gold medal at the 2002 World Junior Championships, making him the competition's youngest-ever gold medalist at the time. In 2004, at the CARIFTA Games, he became the first junior sprinter to run the 200 m in less than 20 seconds with a time of 19.93 seconds. He turned professional in 2004, and although he competed at the 2004 Summer Olympics, he missed most of the next two seasons due to injuries. In 2007, he broke Don Quarrie's 200 m Jamaican record with a run of 19.75 seconds.

The following year he further lowered his own 100 m and 200 m world records to 9.58 s and 19.19 s respectively at the 2009 World Championships. This made him the first man to hold both the 100 and 200 m world and Olympic titles at the same time.
His 2009 record breaking margin over 100 m is the highest since the start of digital time measurements. His achievements in sprinting have earned him the media nickname "Lightning Bolt", and his awards include the IAAF World Athlete of the Year, Track & Field Athlete of the Year, and Laureus Sportsman of the Year.
Secure Usain Bolt for Your Event

Based on your interest in Usain Bolt as a speaker or for a personal appearance, Direct Sportslink has provided you additional links below for other sports talent with similar appearance fees, speaker topics, and categories that match Usain Bolt.