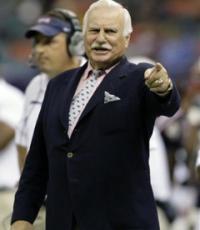 He led the Miami Hurricanes to a National Championship and helped the 1972 Dolphins complete their perfect season
Fee Range: $10,000 - $20,000
Secure Howard Schnellenberger
for Your Event

In Louisville, Kentucky, Schnellenberger played football, basketball and baseball before earning a scholarship to the University of Kentucky. Schnellenberger was an All-American tight end at Kentucky and worked as an assistant coach there under head coach Blanton Collier. Schnellenberger also served as offensive coordinator under his college coach Bear Bryant at Alabama, helping Alabama to win three national championships in 1961, 1964 and 1965.

Schnellenberger was hired by Don Shula in 1970 to become the offensive coordinator for the Miami Dolphins and parlaying the success of Miami's 1972 perfect season into becoming the new head coach of the Baltimore Colts in 1973 shortly before accepting the head coaching position at the Univeristy of Miami.

Schnellenberger arrived to a Miami program that was on its last legs, with the program having almost been dropped by the university just a few years prior. Drawing from the boot camp methodology learned from mentors Bryant and Shula, Howard's third season at Miami the team had finished the season in the AP Poll top 25 twice--something that had not happened there since 1966. He would go on to coach Miami to a National Championship in 1983, defeating Nebraska in the 50th Orange Bowl.

Secure Howard Schnellenberger for Your Event