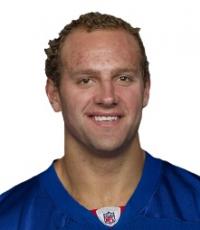 He is best known for making the NFL after surviving cancer while a star football player for Boston College University
Fee Range: $5,000 - $10,000
Secure Mark Herzlich
for Your Event

Direct Sportslink secured Mark Herzlich for his appearance and honored evening for the Cancer Survivors Hall of Fame dinner in New York. Mark's cancer surviving story is a true inspiration for anyone. He would be an ideal guest speaker for any cancer related motivational speaker event. To hire Mark Herzlich for any appearance or to secure a football motivational speaker for an event please contact a Direct Sportslink sports celebrity booking agent.

Mark Herzlich played college football at Boston College University  where he earned College Football News Freshman All-American honors. As a sophomore he started all 14 games for the Eagles. Herzlich entered his junior season (2008) as a preseason all-star candidate. He was named to the Lott Trophy and Butkus Award watchlists prior to the season. In 2008 Herzlich was a First-team All-American and the ACC Defensive Player of the Year. He was also a finalist for the Butkus Award, and a quarterfinalist for the Lott Trophy. In November 2008, Herzlich was a projected top-15 pick by many scouts for the 2009 NFL Draft but announced his return to Boston College for the 2009 season.

Herzlich missed the entire 2009 season due to Ewing's Sarcoma, a rare form of bone cancer, which he overcame and earned numerous honors for his courage and outreach, including the Disney Spirit Award, Nils V. "Swede" Nelson Award, an honorary Lott Trophy, and the ACC Commissioner’s Cup.

In 2010 Herzlich returned to the football field and won the Rudy Award and the ACC's Brian Piccolo Award after starting all 13 games and finishing third on the team with 65 tackles and 50 solo stops.

Secure Mark Herzlich for Your Event

Based on your interest in Mark Herzlich as a speaker or for a personal appearance, Direct Sportslink has provided you additional links below for other sports talent with similar appearance fees, speaker topics, and categories that match Mark Herzlich.