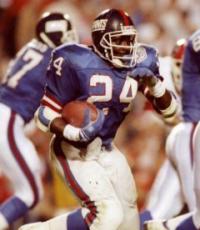 During his college career, Anderson broke Chuck Foreman's career rushing records at the University of Miami, becoming the first player to rush for more than 1,000 yards in the school's history his senior year with 1,266 yards.

Anderson was selected in the first round of the 1979 NFL Draft. In 1989, Anderson become the top running back for Bill Parcells' ball control offense and was named NFL Comeback Player of the Year while playing for the New York Giants. He scored a career high 14 rushing touchdowns, and rushed for 1,023 yards on 325 carries. He was also the top running back for the Giants the following year, when they won Super Bowl XXV, and was named Super Bowl MVP for his 102 yards and a touchdown on 21 carries.

Ottis has appeared on several major local and national radio and television shows including: the David Letterman Show and Good Morning America. He has experience as a broadcast analyst with WFAN for the New York Giants, and has co-hosted three radio shows in St. Louis with former Cardinal teammates Theotis Brown, E.J. Junior and Roy Green respectively.

As president of Ottis J. Anderson Enterprises and senior partner of TWO FOUR, Ottis is involved in enhancing the excitement of sports fans and enthusiasts through a recently established apparel and premium goods line called "MoodaChainz". He is also involved in several ventures including serving as Vice President of Public Relations for HRH, where he is involved with insurance benefits for municipalities, school boards and privately held businesses in the state of New Jersey.

Ottis has been affiliated with many community and charities such as the United Way, Boys & Girls Clubs of America, American Heart Association, National Multiple Sclerosis Society, The Breast Cancer Research Foundation, D.A.R.E., and the Deborah Hospital Foundation.

Secure Ottis Anderson for Your Event

Based on your interest in Ottis Anderson as a speaker or for a personal appearance, Direct Sportslink has provided you additional links below for other sports talent with similar appearance fees, speaker topics, and categories that match Ottis Anderson.