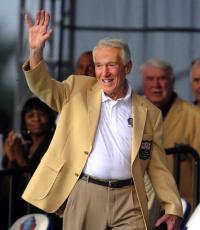 A Marv Levy personal appearance, Marv Levy speaking engagement, or Marv Levy endorsement will reflect well on your company. To hire Marv Levy now for any corporate appearance, fundraiser, motivational speaker event, personal appearance, autograph signing, or website endorsement please contact our celebrity agents at 1-877-6-SPORTS. We will contact Marv Levy or contact Marv Levy's agent and provide you with the booking fees and availability immediately upon your request. Direct Sportslink is the only sports speakers bureau and talent booking agency based in the United States securing only sports talent for corporations, associations, and organizations for motivational speaking engagements, personal appearances, and endorsements. We are the premier sports celebrity booking agency and a sports celebrity procurement expert. Accordingly, we will provide you with any relevant Marv Levy website information and booking agent details so that you can hire Marv Levy for your next event.

Marv Levy began his professional football coaching career in 1969 as the kicking teams coach for the Philadelphia Eagles before joining the Los Angeles Rams in 1970 as a special teams coach. In 1971, he served as the Washington Redskins' special teams coach for two seasons. Levy then served as the head coach of the Montreal Alouettes of the Canadian Football League for five seasons. He coached Montreal to three CFL Grey Cup appearances and two championships, and won the Annis Stukus Trophy (Coach of the Year) in 1974. Levy returned to the NFL in 1978 as head coach of the Kansas City Chiefs. He coached the Chiefs for five seasons with steady improvement each year, but was fired at the end of the strike-shortened 1982 season with a 3–6 record.

Midway through the 1986 season, following a two-year hiatus from coaching and one season as the head coach of the Chicago Blitz of the USFL, Levy returned to the NFL as head coach of the Buffalo Bills. He finished the season with a 2–5 record. In 1987, his first full season with the Bills, the team returned to respectability with a 7–8 record and were in the playoff hunt throughout most of the season. The following season the team posted a 12–4 record and won the first of six AFC Eastern Division titles. With his high-powered “no-huddle” offense, Levy's Bills went on to lead his AFC championship team to four consecutive Super Bowl appearances.

Levy retired in 1997 and in 2001 Levy was elected to the Pro Football Hall of Fame in Canton, Ohio. He coached several popular Buffalo Bills Hall of Fame players including Thurman Thomas, Bruce Smith, and Jim Kelly.

Secure Marv Levy for Your Event

Based on your interest in Marv Levy as a speaker or for a personal appearance, Direct Sportslink has provided you additional links below for other sports talent with similar appearance fees, speaker topics, and categories that match Marv Levy.