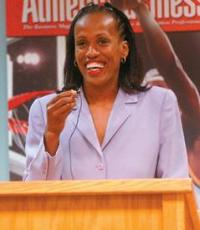 The keynote speech of the 2011 US Lacrosse Convention began and ended with a standing ovation. That's how excited the lacrosse world was to hear from Olympic track and field great Jackie Joyner-Kersee. Joyner-Kersee, who was named female athlete of the 20th century by Sports Illustrated, spoke to several thousand attendees at the Baltimore Convention Center on opening night of US Lacrosse's largest annual event. She focused her remarks on the idea of dreams, and how she had to develop mental toughness required to win seven Olympic medals, including back-to-back gold in the heptathalon in the 1988 and 1992 Olympics. Read More

Jackie Joyner-Kersee is generally considered a one of the best all-around female athlete in the world and the all-time greatest heptathlete. She won three gold, one silver and one bronze Olympic medals.

Joyner-Kersee was the first woman to score 7,000 points in a heptathlon event (during the 1986 Goodwill Games). She went to UCLA, where she starred in both track and basketball. She is the sister-in-law of Florence Griffith Joyner. Her brother, Al Joyner, is also an Olympic gold medalist, having won the Olympic triple jump in 1984. Sports Illustrated voted her the greatest female athlete of the 20th century. In 1986, she received the James E. Sullivan Award as the top amateur athlete in the United States.

Along with the sudden death of her sister-in-law, Joyner-Kersee endured other great tragedies as a young child: When she was 11, she saw a man get killed. A few years later, she called her grandmother to talk, only to find out her grandmother too, had been killed. Also, when she was a freshman at UCLA, she suddenly had to return home when her 37-year-old mother contracted a rare form of meningitis. By the time she arrived, her mother was in a coma and brain dead. Since her father could not bring himself to have life support removed from his wife, it fell to Jackie and Al to authorize removal, which they did.

Perhaps her greatest challenge, however, was physical. She suffers from exercise-induced asthma, and on more than one occasion had to be hospitalized following an event. She would be an ideal health and wellness speaker or asthma medical related topics. Jackie is one of the top Olympic motivational speakers.

Secure Jackie Joyner-Kersee for Your Event