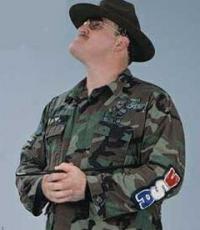 He was one of the most popular professional wrestlers worldwide in the 80s and 90s; He was enshrined into the WWE Hall of Fame in 2004
Fee Range: $5,000 - $10,000
Secure Sergeant Slaughter
for Your Event

Sergeant Slaughter (born Robert Remus) is an American WWE employee, and semi-retired professional wrestler. From the late 1970s to the early 1990s, Slaughter had success in the National Wrestling Alliance, American Wrestling Association, and World Wrestling Federation. He is currently working for WWE as a road agent on its Raw brand.

Slaughter held numerous regional titles early in his career and experienced his first major success in the NWA,  capturing its World Tag Team Championship with Don Kernodle. Between 1980 and 1981, he wrestled in the WWF, and joined Mid Atlantic Wrestling in September of 1981, where he won the NWA United States Heavyweight Title and the NWA World Tag Team Titles. Upon his return to the WWF in 1983, Slaughter was a top contender to Bob Backlund's WWF Championship. He received a considerable push in the AWA throughout 1985 and 1986, becoming its Heavyweight Champion shortly after his arrival. He became a top contender for the AWA's World title in 1989.

In the summer of 1990 Slaughter returned to the World Wrestling Federation, and became the WWF's Champion at the 1991 Royal Rumble. After a hiatus, he returned to television in 1997 to assume the role of WWF's on-air commissioner, relinquishing the role to Shawn Michaels in '98.

Sgt. Slaughter was part of the G.I. Joe cartoon and comic book, making an appearance in G.I. Joe: The Movie. He also appeared as a special guest on the The Super Mario Bros. Super Show. Slaughter has appeared from time to time in the ring, mostly at house shows, and was inducted into the WWE Hall of Fame in 2004.

Sgt. Slaughter has appeard on Comedy Central's Tosh.0, and in the animated series Code Monkeys.

Secure Sergeant Slaughter for Your Event

Based on your interest in Sergeant Slaughter as a speaker or for a personal appearance, Direct Sportslink has provided you additional links below for other sports talent with similar appearance fees, speaker topics, and categories that match Sergeant Slaughter.