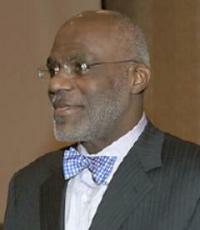 He has been a Justice on the Minnesota Supreme Court; He is a member of the Pro Football Hall of Fame
Fee Range: $5,000 - $10,000
Secure Alan Page
for Your Event

Direct Sportslink secured Justice Alan Page for Riverbank's community events including a speech to local law school students, a visit to the local high school and a motivational speaking engagement to various students and parents in a fundraising effort.

An Alan Page personal appearance, Alan Page speaking engagement, or Alan Page endorsement will reflect well on your company. To hire Alan Page now for any corporate appearance, fundraiser, motivational speaker event, personal appearance, autograph signing, or website endorsement please contact our celebrity agents at 1-877-6-SPORTS. We will contact Alan Page or contact Alan Page's agent and provide you with the booking fees and availability immediately upon your request. Direct Sportslink is the only sports speakers bureau and talent booking agency based in the United States securing only sports talent for corporations, associations, and organizations for motivational speaking engagements, personal appearances, and endorsements. We are the premier sports celebrity booking agency and a sports celebrity procurement expert. Accordingly, we will provide you with any relevant Alan Page website information and booking agent details so that you can hire Alan Page for your next event.

Following high school, Page attended the University of Notre Dame, where he led the school's storied football program to a national championship in 1966. That same year, Page was named a college football All-American for his achievements on the field.

He was presented with one of the 1992 Silver Anniversary Awards (NCAA) for achieving personal distinction since his graduation. In 2005 he was awarded the National Football Foundation Distinguished American Award. In between he was inducted into College Football Hall of Fame (1993).

In 1967, he participated in the East-West Shrine Game and 25 years later received the "Babe Hollingbery" Award for his outstanding and lasting performance as he was inducted to that game's Hall of Fame. Named to the Academic All-American Hall of Fame in 2001 and as such received the Dick Enberg Award. Also a winner of the Walter Camp Alumni of the Year in 1988. In 2002, he was inducted into International Scholar-Athlete Hall of Fame. 2004 winner of the Theodore Roosevelt Award (NCAA) which is awarded to a graduates from an NCAA institution who earned a varsity letter for athletics and who ultimately became a distinguished citizen of national reputation.

During Page's 15-year NFL-tenure as a Viking from 1967-178 and a Bear from 1978-1981, the Vikings won an impressive four conference titles. Page played in 218 consecutive games without an absence, during which he recovered 22 fumbles, made 173 sacks (Vikings-133, Bears-40), and scored three touchdowns (two on fumble recoveries and one on an interception return). He also had three safeties, the second most in NFL history. Set a career-high in sacks with 18 in 1976 and is unofficially credited with 5 other seasons with 10 sacks or more.

Page was the National Football League Players Association player representative from 1970-1974 and 1976-1977, a member of the NFLPA Association Executive Committee from 1972-1975 and was named to the Vikings' 40th Anniversary Team in 2000. Along the way, Page was named the Associated Press NFL Defensive Player of the Week three times.

In 1988, Page was further honored by his induction into the Pro Football Hall of Fame. In 1999, he was ranked number 34 on The Sporting News' list of the 100 Greatest Football Players, the highest-ranking Viking player. Received the NFL Alumni Career Achievement Award in 1995 for attaining success in his post-NFL career.

Long before Page's football career came to a close, he was laying the groundwork for his future role as a justice with the Minnesota Supreme Court. While playing professional football full-time, Page attended the University of Minnesota Law School, from which he received his law degree in 1978. In 1992, Page was elected to an open seat as an Associate Justice of the Minnesota Supreme Court, becoming the first African-American to ever serve on that court. He was re-elected in 1998, becoming the biggest vote-getter in Minnesota history, and was again re-elected in 2004.

Far surpassing both his impressive achievements on the playing field and in the courtroom are the philanthropic contributions Justice Page has made to those in need. In 1988, Page and his wife Diane founded the Page Education Foundation. That Foundation provides much-needed financial and mentoring assistance to minority college students, in exchange for those students' commitment to further volunteer service in the community. As of today, the Page Foundation has awarded grants to 3,320 students, who in turn have given over 220,000 hours of their own time to young children. Upon his retirement from the bench, Justice Page hopes to become a public school teacher, so that he might make an even more personal impact on the children the Foundation has served for the past 20 years.

Secure Alan Page for Your Event

Based on your interest in Alan Page as a speaker or for a personal appearance, Direct Sportslink has provided you additional links below for other sports talent with similar appearance fees, speaker topics, and categories that match Alan Page.