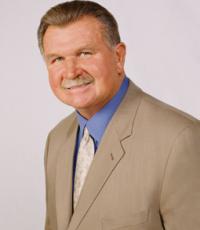 Coach Ditka gave an impactful speech to a sales and marketing team for Magnifi Group. His "A.C.E." (Attitude, Enthusiasm, Commitment) speech was right on point. To view more Direct Sportslink bookings with Coach Mike Ditka such as the Jewish Federation of Palm Beach Men's Night Out event or the Equinix sales conference please visit our recent events.

Thank you for making our event a success. We were very appreciative of your preparation, and hands-on help - making sure all details of the event were handled smoothly. Coach Mike Ditka more than delivered his part - 100% of the surveys we received showed that attendees would come to another event. We will be working with you again to plan our next event.

Captain of the Pittsburgh football team and an All-American end in 1960, Ditka was a first-round draft choice of the Chicago Bears in 1961, when he caught 56 passes for 1,076 yards and 12 touchdowns to win the NFL's rookie of the year award.

The 6-foot-3, 225-pound Ditka was not only an outstanding blocker, but one of the best pass-catching tight ends in history. His 75 receptions in 1964 was a record for a tight end at the time. He started 84 consecutive games in his six seasons with the Bears and was named an All-Pro from 1961 through 1964.

A foot injury slowed him in 1965 and 1966 and he was traded to the Philadelphia Eagles. In his first season there, he suffered a partially torn knee ligament that further limited his effectiveness.

After two seasons in Philadelphia, Ditka was traded to the Dallas Cowboys in 1969. He finished his playing career with Dallas in 1972. Used mostly as a backup by the Cowboys, he showed something of his old form in 1971, catching 30 passes during the regular season and scoring a touchdown in the team's 24-3 Super Bowl victory over the Miami Dolphins.

Ditka returned to the Bears as head coach in 1982. He was consensus coach of the year in 1985, when the Bears won 15 of 16 regular season games and beat the New England Patriots 46-10 in the Super Bowl.

Ditka worked as a broadcaster for several years and was lured back into coaching by the New Orleans Saints in 1997. He made headlines and drew headshakes when he traded all of the Saints' 1999 draft choices to the Washington Redskins for the fifth overall pick in the draft, which he used on Texas running back Ricky Williams.

Williams led the team in rushing as a rookie, but the Saints went only 3-13 after having been 6-10 in each of Ditka's first two seasons. Ditka resigned after that season with an overall coaching record of 127-101-0. He went back into broadcasting working for ESPN on NFL coverage.

In October 2011, Ditka and the 1985 team went to the White House after they didn't attend in 1985 due to the Space Shuttle Challenger disaster. He presented President Obama with a Chicago Bears jersey with the number 85 on it with Obama on the back of it.

Secure Mike Ditka for Your Event

Based on your interest in Mike Ditka as a speaker or for a personal appearance, Direct Sportslink has provided you additional links below for other sports talent with similar appearance fees, speaker topics, and categories that match Mike Ditka.