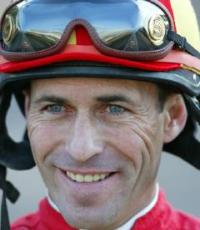 He has won three Kentucky Derbys, three Belmont Stakes, and two Preakness Stakes as a jockey; He was inducted into the National Museum of Racing and Hall of Fame
Fee Range: $5,000 - $10,000
Secure Gary Stevens
for Your Event

Stevens may have made his name out west but is a familiar face on the Triple Crown circuit. His victories in the Kentucky Derby began in 1988 aboard Winning Colors which he credits as his most exciting win - This was followed with victories by Thunder Gulch in 1995, and Silver Charm in 1997.

In 1995, Gary won the first and last legs of the series with Thunder Gulch, trained by D. Wayne Lukas. Thunder Gulch finished third in the Preakness.

In 1998 Real Quiet won the Derby and the Preakness and looked to have the Crown wrapped up when Kent Desormeaux had him in front by five lengths in the stretch of the Belmont Stakes. And then along came Gary. In one of the greatest rides in history, Stevens and Victory Gallop caught Real Quiet by a nose to win the mile-and-a-half Test of the Champion. Later that year, he was inducted into the United States Racing Hall of Fame.

Has won eight Breeders' Cup races from 86 mounts. He earned national money titles in 1990 and 1998.  He also ranked among top 10 money winners from 1985-99 and in 2001. In November of 2005, Stevens announced his retirement. He has worked as an analyst for NBC Sports and HRTV.  In 2009, he began Gary Stevens Racing Stable Inc., in which he trains horses with his son.

Secure Gary Stevens for Your Event

Based on your interest in Gary Stevens as a speaker or for a personal appearance, Direct Sportslink has provided you additional links below for other sports talent with similar appearance fees, speaker topics, and categories that match Gary Stevens.