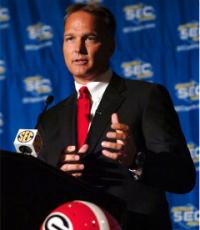 After serving as backup quarterback to future Pro Football Hall of Fame quarterback Jim Kelly, Mark Richt started his coaching career in 1985 as a volunteer quarterbacks coach for the Florida State Seminoles, serving under Bobby Bowden.

While at Florida State, he coached two Heisman Trophy winners at quarterback in Charlie Ward and Chris Weinke and was part of two national championships (1993 and 1999) as an assistant coach.

Richt was hired as head coach of the Georgia Bulldogs before the 2001 season, replacing Jim Donnan. In 2011 during his 11th season at Georgia he collected his 100th career victory by leading the Bulldogs to a win over the Tennessee Volunteers. He won 151 games from 2001-2015 at the University of Georgia.

He was named Head Football Coach at the University of Miami in 2015.

Secure Mark Richt for Your Event

Based on your interest in Mark Richt as a speaker or for a personal appearance, Direct Sportslink has provided you additional links below for other sports talent with similar appearance fees, speaker topics, and categories that match Mark Richt.