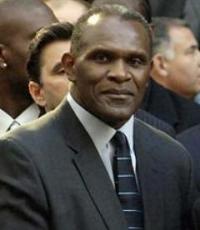 He played his entire career for the New York Giants; He is a member of the Pro Football Hall of Fame
Fee Range: $10,000 - $20,000
Secure Harry Carson
for Your Event

Before his NFL career, Carson played for South Carolina State University from 1972-1975, not missing a single game in all 4 years. He became the first Mid-Eastern Athletic Conference player to win 2 consecutive defensive player of the year honors, and assisted the Bulldogs to 2 consecutive conference championships. In 1975, he was a first team selection on the College Football All-America Team and set school records with 117 tackles and 17 sacks. With Carson as their captain, the Bulldogs defense recorded 6 shutouts in 1975, and held their opponents to just 29 points, an NCAA record for a 10 game season. In 2002, Carson was enshrined in the College Football Hall of Fame.

After his college career, he was drafted by the Giants. He spent all of his 13 seasons with them, leading the team in tackles for 5 of the seasons, and was their captain for 10 of those seasons. Harry Carson was a member of the Crunch Bunch, a team of fierce linebackers composed of Carson, Brad Van Pelt, Brian Kelley, and Lawrence Taylor. The group is widely considered one of the best defensive combos in NFL history. He also made 9 Pro Bowl appearances (1978-1979, 1981-1987) in his career. In the 1980s, he was joined by linebackers Lawrence Taylor and Carl Banks, giving the Giants one of the most feared and respected group of linebackers in the NFL. He retired at the end of the 1988 season, 2 years after assisting the franchise to its first Super Bowl win in Super Bowl XXI. He was a major factor in the game, finishing it with 7 tackles.

Carson was elected to the Pro Football Hall of Fame in 2006. His selection came after years of outspoken criticism of the Hall of Fame selection process. Carson's principal criticism of the process was that the vote is done by the media, not players and coaches. Carson went so far as to ask to have his name taken off the ballot in protest. Despite this, the reaction to his induction into the Hall was "well-deserved".

In his 13 seasons, Carson intercepted 11 passes and returned them for 212 yards. He also recovered 14 fumbles, returning them for 36 yards and a touchdown. Officially, he recorded 8 quarterback sacks (sacks did not become an official NFL statistic until 1982)

Carson remains in close involvement with the Giants. He has also had a successful career in sports broadcasting and even has his own company, "Harry Carson Inc." which deals mainly in sports consulting and promotions. He currently co-hosts Giants Game Plan on FOX with Bob Papa.

Secure Harry Carson for Your Event

Based on your interest in Harry Carson as a speaker or for a personal appearance, Direct Sportslink has provided you additional links below for other sports talent with similar appearance fees, speaker topics, and categories that match Harry Carson.