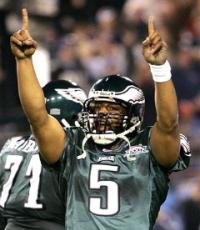 He is one of the best players in Philadelphia Eagles franchise history
Fee Range: Contact Us
Secure Donovan McNabb
for Your Event

After redshirting in 1994, his first year at Syracuse, McNabb went on to start every game during his college career, compiling a 35-14 record. As a freshman, he completed the longest touchdown pass in Syracuse's history, a 96-yard throw against West Virginia University, in a game where he accounted for 354 total yards of offense; he was named the Big East Conference's rookie of the year at the end of the season. McNabb amassed 2,892 yards of total offense in his junior season to set a school record.

McNabb was named the Big East's offensive player of the decade for the 1990s, and offensive player of the year an unprecedented three times from 1996-98, as well as the first-team all-conference vote earner in each of his four seasons. Later, he was named to the Syracuse All-Century Football team. He also spent two years as a reserve on the school's nationally ranked basketball team.

The Philadelphia Eagles selected McNabb as the second overall pick of the 1999 NFL Draft. McNabb led the Eagles to multiple NFC East division championships and multiple NFC Championship Games and one Super Bowl. At the time of his retirement, McNabb was the Eagles' all-time leader in career wins, pass attempts, pass completions, passing yards, and passing touchdowns.

McNabb retired and joined the NFL Network in 2012. He retired having passed for over 230 touchdowns and threw for over 37,000 yards in the NFL.

Secure Donovan McNabb for Your Event

Based on your interest in Donovan McNabb as a speaker or for a personal appearance, Direct Sportslink has provided you additional links below for other sports talent with similar appearance fees, speaker topics, and categories that match Donovan McNabb.