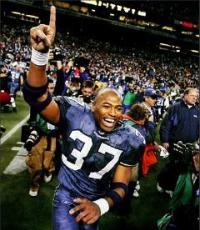 He is the all-time rushing leader for the Seattle Seahawks; In 2005, he led the NFL in rushing yards, rushing touchdowns, and Pro Bowl votes; He is a well known Christian speaker
Fee Range: $10,000 - $20,000
Secure Shaun Alexander
for Your Event

Direct Sportslink worked directly with Shaun Alexander to secure him for the Clearbranch faith based motivational speaker series in Alabama. Shaun was joined by several other former SEC football standouts. Alexander spoke deeply of his faith in Jesus Christ, attributing his life's success on the foundation of his beliefs. "I love the fact that I can't take any credit for where I am" he said, as he shared advice with many fathers in the room about the word "love". To secure Shaun Alexander for any Christian motivational speaking engagement or personal appearance please contact Direct Sportslink for an immediate fee quote and availability.

After a standout career at Boone County High School in his hometown, Alexander won the Kentucky "Mr. Football" Award, an honor given to the top high school player in the state. He set records of 3,166 rushing yards and 54 touchdowns for his high school team.

Alexander wasted little time in showing his prowess on the football field at the collegiate level. As a freshman in 1996, he ran for 291 yards, an Alabama single-game rushing record, and four touchdowns against LSU in Tiger Stadium. Alexander still holds the Alabama rushing record with 3,565 yards in four seasons.

Shaun Alexander was drafted by the Seattle Seahawks with the 19th pick of the 2000 NFL Draft. Alexander played in all 16 games his rookie year but saw limited action behind starter Ricky Watters. His fame rose the following year. In a game played on November 11, 2001 against the Oakland Raiders, he rushed for a franchise record 266 yards on 35 carries. In 2001, he led the NFL in rushing touchdowns with 14 and was tied for second with Terrell Owens with 16 total touchdowns.

On December 11th, 2005, in Seattle's NFC West-clinching victory over the San Francisco 49ers, Alexander ran for his 9th 100-yard  rushing game of the year, breaking Chris Warren's franchise record of eight 100-yard games. In the process he also set a more significant NFL record, running for 100 yards against divisional opponents in nine straight games, a record previously held by Walter Payton. On December 18th, 2005, visiting the Tennessee Titans, gaining 1,600 yards for the 2nd consecutive season, Alexander ran for a Seahawks franchise record 10th 100-yard rushing game, also scoring his 24th rushing touchdown of the year, and 86th rushing TD of his career, tying him with Priest Holmes at 12th on the all-time rushing touchdown leader list. Perhaps even more substantial is this: his 96th career touchdown moved him into an 18th place tie with Randy Moss and Eric Dickerson on the all-time touchdown leader list  having already bumped Priest Holmes (94 TDs) into 21st. Alexander became the first Seahawk player to appear on the cover of Sports Illustrated.

Four days later, on January 5, he was awarded with the 2005 NFL MVP Award, becoming the first Seahawk to win the MVP award in franchise history. He beat out New York Giants running back Tiki Barber and Indianapolis Colts quarterback Peyton Manning who had won the award the previous two years. Alexander garnered 19 out of a possible 50 votes. A day after receiving the MVP award, Alexander was named Associated Press Offensive Player of the Year. He received 34 votes of a panel of 50 NFL sportwriters and broadcasters. He was also named the FedEx Ground NFL Player of the Year. At the ESPY Awards Alexander received two awards, Best Record Breaking Performance and Best NFL Player. His last game in the NFL was in 2008 and he finished his career with 100 touchdowns and over 9,000 yeards.

A born-again Christian, Alexander ia very outspoken about his faith.

Secure Shaun Alexander for Your Event

Based on your interest in Shaun Alexander as a speaker or for a personal appearance, Direct Sportslink has provided you additional links below for other sports talent with similar appearance fees, speaker topics, and categories that match Shaun Alexander.