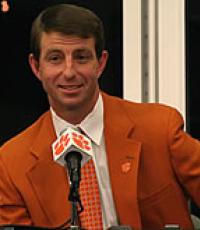 He is best known for his success as the Head Football Coach at Clemson University
Fee Range: $10,000 - $20,000
Secure Dabo Swinney
for Your Event

Swinney attended the University of Alabama, where he joined the Crimson Tide football program as a walk-on wide receiver in 1989. Swinney earned a scholarship and lettered on three teams (1990–1992), including the Crimson Tide's 1992 National Championship team. During his time as an undergraduate at Alabama, he was twice named an Academic All-SEC and SEC Scholar Athlete Honor Roll member.

After graduation, Swinney joined the Alabama coaching staff as a graduate assistant, serving from 1993–1995. In December 1995 he received his M.B.A from Alabama and became a full-time coach of the Crimson Tide, in charge of wide receivers and tight ends.

In 2002, his former position coach at Alabama, Tommy Bowden, made an offer for him to join his staff and coach wide receivers at Clemson, and Swinney joined in 2003. Swinney proved to be both an excellent wide receivers coach as well as recruiting coordinator, coaching ACC-leading receivers and being named one of the nation's top 25 recruiters in 2007 by Rivals.com.

Swinney was named the interim head football coach on October 13, 2008, after previous head coach Tommy Bowden resigned six games into the 2008 season. The Tigers had started the year ranked #9 in the preseason polls, but then went 3–3 (1–2 ACC) in their first six games. Swinney's first action as interim head coach was to introduce a new tradition, the "Tiger Walk", where all players and coaches walk through the parking lot outside Memorial Stadium about two hours before a game as they head inside for final game preparations. On November 1, 2008, Swinney claimed his first victory as the Tigers' head coach by defeating Boston College, breaking Clemson's six-game losing streak against the Eagles. On November 29, 2008, Swinney coached Clemson to a 31–14 win over South Carolina in the annual rivalry game, after which Clemson became bowl eligible, and Swinney's interim status was removed after a vote of confidence by Kirk Fowler. During the 2009 season, Swinney's first full season at the helm, Clemson finished the season with a record of 9–5, won the Atlantic Division title of the Atlantic Coast Conference, defeated Kentucky 21–13 in the 2009 Music City Bowl, and finished the season ranked in the top 25.

Secure Dabo Swinney for Your Event

Based on your interest in Dabo Swinney as a speaker or for a personal appearance, Direct Sportslink has provided you additional links below for other sports talent with similar appearance fees, speaker topics, and categories that match Dabo Swinney.