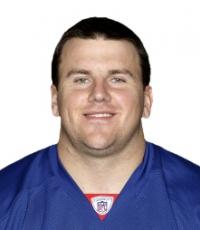 Chris Snee played college football for Boston College and then was selected by the New York Giants in the second round of the 2004 NFL Draft. Snee has played his entire NFL career for the Giants and earned a Super Bowl ring with the Giants in Super Bowl XLII and in Super Bowl XLVI. He has been selected four time (2008, 2009, 2010,2012) to the Pro Bowl.

Snee is the son of Diane and Ed Snee, and has three brothers, Edward, Daniel and Sean. He graduated from Montrose Area Jr./Sr. High School in Montrose, PA in 2000. He married Kate Coughlin, daughter of New York Giants coach Tom Coughlin. They have three sons, Dylan, Cooper, and Walker.
Secure Chris Snee for Your Event

Based on your interest in Chris Snee as a speaker or for a personal appearance, Direct Sportslink has provided you additional links below for other sports talent with similar appearance fees, speaker topics, and categories that match Chris Snee.