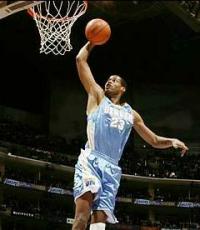 As the college basketball's Player of the Year in 1995-96, Marcus led Massachusetts to its finest season and its first-ever NCAA Final Four berth. Camby was a consensus National Player of the Year selection by the Associated Press, U.S. Basketball Writers Association, CBS/Chevrolet, Basketball Weekly and The Sporting News. He won the Naismith and Wooden Awards as Player of the Year and was selected First Team All-America by AP, UPI, USBWA and Basketball Weekly. He led UMass to a 35-2 record in 1995-96 and the school's first-ever berth in the Final Four, averaging 20.5 points, 8.2 rebounds and 3.9 blocks. He was named MVP of the NCAA East Regional and set an NCAA Tournament career record with 43 blocks in 11 games. He posted a UMass record 336 blocks in 92 career games and became only the fourth college player ever to surpass 300 career blocks.

Marcus' 2005-06 NBA season was one of his most productive season's ever which made him a MVP candidate for the entire NBA.

Camby was traded in 2012 to the New York Knicks.

Secure Marcus Camby for Your Event

Based on your interest in Marcus Camby as a speaker or for a personal appearance, Direct Sportslink has provided you additional links below for other sports talent with similar appearance fees, speaker topics, and categories that match Marcus Camby.