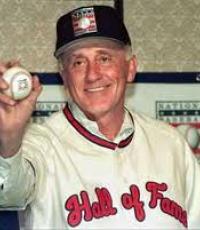 Phil Niekro, nicknamed "Knucksie" because of his usage and skill level with the knuckleball, is a former Major League Baseball pitcher. He was inducted into the Baseball Hall of Fame in 1997. A native of Blaine, Ohio, Niekro attended Bridgeport High School in Bridgeport, Ohio, and was a boyhood friend of NBA Hall-of-Famer John Havlicek. Phil and his younger brother, fellow major league pitcher Joe Niekro, learned to throw a knuckleball from their father, Joe Niekro, Sr., in their backyard as kids.

Based on your interest in Phil Niekro as a speaker or for a personal appearance, Direct Sportslink has provided you additional links below for other sports talent with similar appearance fees, speaker topics, and categories that match Phil Niekro.