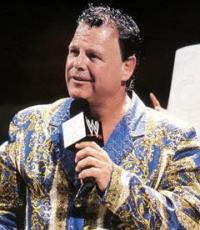 RJ Corman was looking for a well known wrestling name to help them with their safety themed event. Jerry "The King" Lawler was the perfect choice. His presence alone helped bring the theme to life and his work as the MC delighted the crowd.

"The King" is currently signed to World Wrestling Entertainment (WWE), working and wrestling on its Raw brand as the color commentator. He also wrestles and occasionally commentates for the Memphis Wrestling promotion.

In 1999, Lawler ran for mayor of Memphis, Tennessee, beating twelve of the fifteen candidates.

In 2002, he released an autobiography titled "It's Good To Be The King... Sometimes."

Secure Jerry Lawler for Your Event

Based on your interest in Jerry Lawler as a speaker or for a personal appearance, Direct Sportslink has provided you additional links below for other sports talent with similar appearance fees, speaker topics, and categories that match Jerry Lawler.