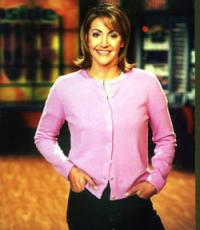 Olympic gold medalist in the 1992 Summer Olympic games; Back to Back NCAA Swimmer of the Year while at Stanford
Fee Range: $10,000 - $20,000
Secure Summer Sanders
for Your Event

Sanders first came to the attention of the swimming world in 1988 after barely missing a spot on the 1988 U.S. Olympic team. She won three gold medals at the 1990 Goodwill Games before embarking on her collegiate career at Stanford University. In two years at Stanford, she compiled six individual NCAA titles and four relay championships. Sanders earned back-to-back NCAA Swimmer of the Year awards and propelled Stanford to a national championship in 1992.

At the 1992 Summer Olympics in Barcelona, Spain, she won gold medals in the 200-meter butterfly and in the 400-meter medley relay. She also won a silver medal in the 200-meter individual medley and a bronze medal in the 400-meter individual medley. Her individual performances in Barcelona were identical to those a year earlier at the 1991 swimming and diving world championships in Perth, Australia. Retiring after the Barcelona Olympics, Sanders later attempted to make the 1996 Olympic team, but failed to qualify.

Secure Summer Sanders for Your Event

Based on your interest in Summer Sanders as a speaker or for a personal appearance, Direct Sportslink has provided you additional links below for other sports talent with similar appearance fees, speaker topics, and categories that match Summer Sanders.