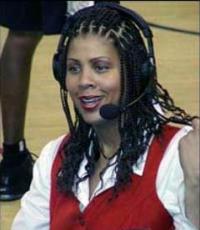 She was the Naismith Player of the Year three-times at USC; She is a member of the Basketball Hall of Fame
Fee Range: $10,000 - $20,000
Secure Cheryl Miller
for Your Event

Many basketball followers say that Cheryl Miller did for women's basketball what Julius Erving did for men's basketball: she took the game off the court and put it into the air. With tremendous grace and athletic ability, Miller established a legacy throughout her high school and college career that may never be equaled.

As a scholastic standout at Riverside (CA) Poly High School, Miller averaged 32.8 points and 15.0 rebounds through 90 games, dished out 368 assists and once scored an incredible 105 points in a game against Notre Vista in 1982. That performance was indicative of her forthcoming collegiate career. Cheryl Miller could score from anywhere.

As a collegiate forward at Southern California (USC) from 1982-86, Miller helped to bring women's basketball to the forefront of American sports. Her superior athletic ability and engaging personality placed her among the elite in the world of college and professional athletics. In 1986, Sports Illustrated named Miller the best male or female player in college basketball. In a spectacular career, Miller scored 3,018 career points -- second to Hall of Famer Carol Blazejowski -- and was a four-time All-America. Miller was named Naismith Player of the Year three times and earned the Wade Trophy once. At USC, Miller led the Trojans to a 112-20 record and NCAA titles in 1983 and 1984. She was a member of the NCAA All-Tournament Team three times and was named NCAA Tournament MVP in 1983 and 1984. During her senior season, Miller picked up her third Naismith Award, the Broderick Award as the Female College Basketball Player of the Year, and established several USC records, including points (3,018, 23.6 PPG), rebounds (1,534, 12.0 rpg), field goals made (1,159), free throws made (700) and steals (462). In total, Miller left USC records in nine USC categories.

Miller guided the United States to a gold medal in the 1984 Olympic Games, and gold medals at the 1983 Pan American and 1986 Goodwill Games. In 1986, Miller became the first female ever nominated for the prestigious Sullivan Award, and in March of that year, USC retired her jersey, making Miller the first Trojan athlete so honored. Following a brief, but successful coaching stint at USC, Miller turned to broadcasting as an NBA studio analyst for TNT along with assorted national networks.

Secure Cheryl Miller for Your Event

Based on your interest in Cheryl Miller as a speaker or for a personal appearance, Direct Sportslink has provided you additional links below for other sports talent with similar appearance fees, speaker topics, and categories that match Cheryl Miller.