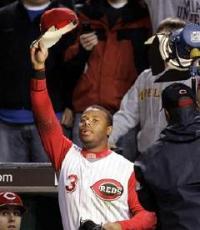 He was elected to the Baseball Hall of Fame in 2015
Fee Range: Contact Us
Secure Ken Griffey Jr.
for Your Event

Nicknamed "The Natural", "The Kid", and "Junior," Griffey is one of the most prolific home run hitters in baseball history, already surpassing fifth place on the list of most career home runs. He is the son of former big league outfielder Ken Griffey, Sr. Many have described his swing as "one of the most beautiful and effortless."

In 1987, Griffey was selected with the first overall pick of that year's amateur draft by the Seattle Mariners. In his eleven seasons with Seattle, Griffey established himself as one of the most prolific and exciting players of the era, racking up 1,752 hits, 398 home runs, 1,152 RBIs and 167 stolen bases. He led the American League in home runs four seasons, was voted the A.L. MVP in 1997, and maintained a .297 batting average.

Griffey was a frequent participant in the All-Star Game during the 1990s. He led his league multiple times in hitting categories and was awarded Gold Gloves for his defensive excellence from 1990 to 1999. In 1990 and 1991, Griffey and his father became the first son and father to play on the same team at the same time. In 1997, he won the American League Most Valuable Player award, hitting .304, with 56 home runs and 147 runs batted in. He later played for the Cincinnati Reds.

In 1999, Griffey ranked 93rd on The Sporting News' list of the 100 Greatest Baseball Players.That same year, he was elected to the Major League Baseball All-Century Team. He retired in 2010 and in 2011 accepted a job working for the Seattle Mariners. He was elected to the Baseball Hall of Fame in 2015.

Based on your interest in Ken Griffey Jr. as a speaker or for a personal appearance, Direct Sportslink has provided you additional links below for other sports talent with similar appearance fees, speaker topics, and categories that match Ken Griffey Jr..