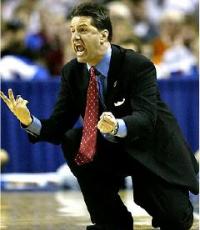 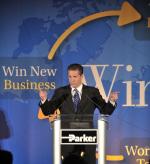 Direct Sportslink's client, Parker Hannifan was looking for a popular motivational speaker with specific speech topics of leadership, adapting to change, and working together as a team. After reviewing several options for our client, Direct Sportslink secured Coach John Calipari for a corporate speaking engagement and appearance on behalf of Parker Hannifan. They were thrilled with his speech and book signing as indicated in the below Coach John Calipari speaker testimonial.

Thanks so much for all of your help in securing Coach Calipari for our meeting. He did an excellent job and was of great help kicking off what was our best ever sales and distribution meeting!

John Calipari has coached in both the NBA and NCAA. From 1988-96, he was head coach at the University of Massachusetts. In 1996, he was named Naismith & Sporting News National Coach of the Year.

From 1996-99, he was head coach and Executive VP of basketball operations for the NBA's New Jersey Nets. During the 2000 season, he was an assistant coach for the Philadelphia 76ers under coach Larry Brown.

From 2000-2009 he was the head coach of the University of Memphis. In his first five years at Memphis, Calipari won 115 games, posted five-straight 20-win season and earned five-consecutive postseason bids. He took Memphis to the Final Four in 2007-2008

Secure John Calipari for Your Event

Based on your interest in John Calipari as a speaker or for a personal appearance, Direct Sportslink has provided you additional links below for other sports talent with similar appearance fees, speaker topics, and categories that match John Calipari.