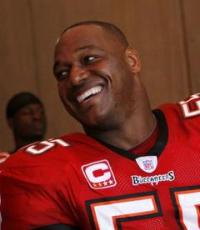 Direct Sportslink secured former Tampa Bay Buccaneers great Derrick Brooks for UDT's sales meeting. UDT asked for Direct Sportslink's expertise to help them find a popular former Tampa sports celebrity who was civic minded, well known, and had business experience. Derrick Brooks was the ideal breakfast keynote speaker. A Christian, civic minded person, and Super Bowl Champion Derrick has also been involved as a senior executive for various businesses. His speaking engagement was a great start to the day with all the UDT employees getting photos and autographs from Derrick. If you are looking to secure Derrick Brooks for any future speaking engagement, personal appearance or endorsement please contact Direct Sportslink. We work directly with Derrick on all appearance opportunities. Please read the below Derrick Brooks testimonial for more information about the UDT event.

Derrick Brooks was amazing, inspiring, entertaining and friendly. Our Management team enjoyed having him as our main speaker, he was professional, engaging and punctual for the event, this was our first time having a celebrity as main speaker and he was great! Thanks again for helping us with this.

Derrick Brooks starred at Washington High School in Pensacola, where, in 2007, he was named to the Florida High School Association All-Century Team, which selected the Top 33 players in the 100 year history of high school football in the state of Florida's history.

At Florida State University he was a four-year letterman and was first-team All-American his senior year. Brooks was on the 1993 Seminoles National Championship team. He was the ACC Defensive Player of the year in 1993, and twice was a Vince Lombardi Award finalist (1993-4).

Brooks was selected in the first round of the 1995 NFL Draft by Tampa Bay. He was selected to the Pro Bowl every year from 1997 to 2007, and again in 2009. He is one of 5 players in history to be voted to 10 Pro Bowls, named Defensive Player of the Year, and be a Super Bowl Champion. The other 4 are Mike Singletary, Reggie White, Lawrence Taylor, and Ray Lewis. He has also been named All-Pro 9 times.

Brooks was named NFL Defensive Player of the Year by the Associated Press in 2002. That year, Brooks tallied four defensive touchdowns in the regular season, an NFL record for linebackers. In Super Bowl XXXVII, his 44-yard interception return for a touchdown ensured a victory for the Buccaneers.

Derrick Brooks is the founder of the Brooks Bunch charity and youth scholarship foundation in the Tampa Bay area. He has taken local youngsters across the nation and South Africa with the objective of presenting a first hand experience, or a "mobile classroom." Brooks also headed the founding of the Brooks-DeBartolo Collegiate High School in Tampa.

Brooks is well known for his charity work and his advocacy of the importance of education. He was the co-recipient of the 2000 Walter Payton Man of the Year Award and was named to the Florida State University Board of Trustees in 2003 by Governor Jeb Bush. Additionally, he won the 2004 Bart Starr Award for his off the field accomplishments in the Tampa Bay community.

Brooks officially announced his retirement on On August 11, 2010 and was elected to the Pro Football Hall of Fame in 2014.

Secure Derrick Brooks for Your Event

Based on your interest in Derrick Brooks as a speaker or for a personal appearance, Direct Sportslink has provided you additional links below for other sports talent with similar appearance fees, speaker topics, and categories that match Derrick Brooks.