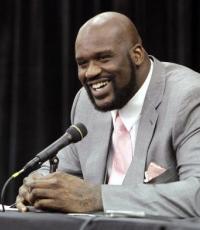 He is one of the greatest players to ever play in the NBA; He was a four time NBA Champion, three time Finals MVP, and 15 time NBA All-Star
Fee Range: Above $100,000
Secure Shaquille O'Neal
for Your Event

Nicknamed "Shaq," he used his size and strength to overpower opponents for points and rebounds throughout his 19 year career.

Following his career at Louisiana State University, O'Neal was drafted by the Orlando Magic with the first overall pick in the 1992 NBA Draft. He quickly became one of the top centers in the league, winning Rookie of the Year in 1992–93 and later leading his team to the 1995 NBA Finals. After four years with the Magic, O'Neal signed as a free agent with the Los Angeles Lakers. He won three consecutive championships in 2000, 2001, and 2002. O'Neal was traded to the Miami Heat in 2004, and his fourth NBA championship followed in 2006. Midway through the 2007–2008 season he was traded to the Phoenix Suns. After a season-and-a-half with the Suns, O'Neal was traded to the Cleveland Cavaliers in the 2009–10 season. O'Neal played for the Boston Celtics in the 2010–11 season before retiring.

In addition to his basketball career, O'Neal has released four rap albums, with his first, Shaq Diesel, going platinum. He has appeared in numerous films and has starred in his own reality shows, Shaq's Big Challenge and Shaq Vs..

Shaq has also become a reserve police officer for the Los Angeles Port Police and the Miami Beach Police, as well as becoming a honorary U.S. Deputy Marshall. On July 14, 2011, Shaq announced he would join Turner Network Television (TNT) as a NBA analyst where he has worked with Chris Webber, Kenny Smith, and Charles Barkley among others.

Secure Shaquille O'Neal for Your Event

Based on your interest in Shaquille O'Neal as a speaker or for a personal appearance, Direct Sportslink has provided you additional links below for other sports talent with similar appearance fees, speaker topics, and categories that match Shaquille O'Neal.