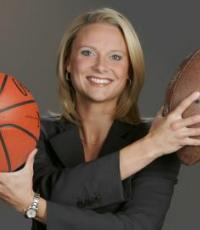 She is a former WNBA player and popular sports television analyst
Fee Range: $2,000 - $5,000
Secure Stacey Dales
for Your Event

She is a former basketball player for the Chicago Sky of the WNBA since the expansion draft of 2006. She also served as a men's and women's college basketball analyst, as well as a sideline reporter for college football games on ESPN.

She led her University of Oklahoma team to the 2002 NCAA Women's Division I Basketball Championship game, won by the University of Connecticut.

On April 5, 2008 Dales announced her retirement from the WNBA for the second time.

On August 31, 2009 the NFL Network announced that Dales would be co-host of Gameday Morning.

Secure Stacey Dales for Your Event

Based on your interest in Stacey Dales as a speaker or for a personal appearance, Direct Sportslink has provided you additional links below for other sports talent with similar appearance fees, speaker topics, and categories that match Stacey Dales.