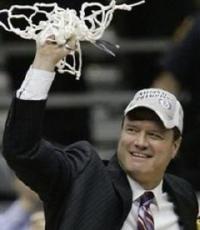 A Bill Self personal appearance, Bill Self speaking engagement, or Bill Self endorsement will reflect well on your company. To hire Bill Self now for any corporate appearance, fundraiser, motivational speaker event, personal appearance, autograph signing, or website endorsement please contact our celebrity agents at 1-877-6-SPORTS. We will contact Bill Self or contact Bill Self's agent and provide you with the booking fees and availability immediately upon your request. Direct Sportslink is the only sports speakers bureau and talent booking agency based in the United States securing only sports talent for corporations, associations, and organizations for motivational speaking engagements, personal appearances, and endorsements. We are the premier sports celebrity booking agency and a sports celebrity procurement expert. Accordingly, we will provide you with any relevant Bill Self website information and booking agent details so that you can hire Bill Self for your next event.

Self played collegiate basketball at Oklahoma State University, where he was a four-year letterman between 1982 and 1985 and was an All-Big Eight freshman selection in 1982.

After a successful playing career as Oklahoma High School Basketball Player of the Year in 1981 at Edmond High School and then playing for Paul Hansen's Oklahoma State Cowboys, Self joined Larry Brown's coaching staff at the University of Kansas. Self remained at Kansas as an Assistant Coach through the 1985-1986 seasons. Between 1986 and 1993, Self was an assistant coach at Oklahoma State University.

Self became the head coach of Oral Roberts University in 1993. In his fourth season (1996-1997), ORU registered a 21-7 record as the school made its first post season tournament appearance since 1983-1984 in the National Invitation Tournament. After rebuilding the Golden Eagles, Self was hired by crosstown rival the University of Tulsa and spent three seasons (1998 to 2000) there, compiling a Tulsa-best 74-27 record. While at TU, he coached the Hurricane to two NCAA tournament appearances in 1999 and 2000, where they made their first ever Elite Eight appearance. After his success at Tulsa, The University of Illinois picked Self as their head coach. In his three years at Illinois, he lead them to an Elite Eight and Sweet 16 appearnce. In 2003, Self left to join the Kansas Jayhawks. In his first season at Kansas, Self led his new Kansas team to the Elite Eight at the NCAA tournament.

In the 2007-2008 season, Self's Kansas team won the Big 12 regular season title and the Big 12 conference tourney. They then triumphed through NCAA tournament to claim the national title over Memphis in a 75-68 overtime victory in the NCAA Championship Game on April 7, 2008. Self is one of a few active coaches who have led three different teams to the Elite Eight of the NCAA Tournament. He is a four-time finalist for the Naismith Coach of the Year Award (2000, 2001, 2002, 2003), was named National Coach of the Year by The Sporting News in 2000, and the Big 12 Coach of the Year in 2006.

In June 2006, Self and his wife, Cindy, established the Assists Foundation, an organization to serve as a fundraising conduit for organizations that serve a variety of youth initiatives. The mission of Assists is to help provide young people access to better lives. This is accomplished by identifying areas of need and working with other community-based institutions to provide creative and lasting solutions.

Secure Bill Self for Your Event

Based on your interest in Bill Self as a speaker or for a personal appearance, Direct Sportslink has provided you additional links below for other sports talent with similar appearance fees, speaker topics, and categories that match Bill Self.