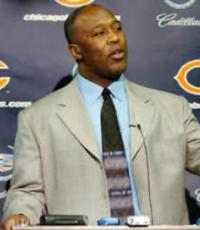 He has coached both the Chicago Bears and Tampa Bay Buccaneers
Fee Range: $20,000 - $30,000
Secure Lovie Smith
for Your Event

Lovie Smith has spent over 30 years in coaching at the collegiate and professional levels. He began his coaching career at his hometown high school, Big Sandy High School, in 1980 before moving to Cascia Hall Prep in Tulsa the following year. Two years later, Smith made the jump to the college ranks at his alma mater of Tulsa as linebackers coach, where he stayed through 1986. Smith moved on to coach linebackers at Wisconsin (1987), Arizona State (1988-91), and Kentucky (1992). Smith was the defensive backs coach at Tennessee (1993-94) and Ohio State (1995). In 1996, Smith made his jump to the NFL as the linebackers coach for the Tampa Bay Buccaneers.

He spent the next four years with Tampa, before becoming the defensive coordinator with the St. Louis Rams in 2000. After a three year stint with the Rams, Smith became the 13th head coach of the Chicago Bears in team history. He lead the Bears to the 2006 NFL Playoffs and later that year became the first African American head coach to lead his team to a Super Bowl. The Bears later lost Super Bowl XLI to the Colts.

Smith is a devout Christian and contributes to his former church in Texas even though he no longer resides there. He and his wife, MaryAnne, are founders of the Lovie and MaryAnne Smith Foundation, a program which donates college tuition funds towards impoverished children.

In 2012, Smith was inducted into the Texas Sports Hall of Fame, along with Mack Brown, and Fred Couples. He was named Head Coach of the Tampa Bay Buccaneers in 2014 but relieved from his duties in 2015.

Secure Lovie Smith for Your Event

Based on your interest in Lovie Smith as a speaker or for a personal appearance, Direct Sportslink has provided you additional links below for other sports talent with similar appearance fees, speaker topics, and categories that match Lovie Smith.