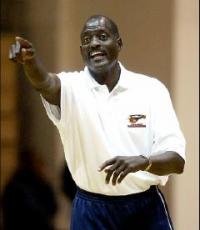 Drafted out of New Mexico by the Lakers in the third round of the 1978 NBA Draft (60th overall), "Coop" became an integral part of the "Showtime" Los Angeles Lakers teams of the 1980s with his indomitable will on the defensive end of the court.

In his 12-year NBA career, he was named to eight NBA All Defensive Teams, including five First Teams. He won the NBA's Defensive Player of the Year award in 1987. He was a member of five Lakers championship teams in 1980, 1982, 1985, 1987 and 1988. At 6 ft 5 inches tall the rail thin Cooper played shooting guard, small forward, and sometimes point guard, although his assignment was invariably the other team's best shooter at the 2 or 3 position. Larry Bird has always said that Cooper was the best defender he played against. For his career Cooper averaged 8.9 points, 4.2 assists, 3.2 rebounds, 1.2 steals, and 0.6 blocks per game. A popular player among Lakers fans, home crowds were known to chant, "Coooooooop" whenever he controlled the ball.

Following his playing career, he served as Special Assistant to Lakers' general manager Jerry West for three years before joining the Lakers' coaching staff in March 1994 under Magic Johnson and later with Del Harris from 1994-97. He became an assistant coach of the WNBA's Los Angeles Sparks in 1999, and helped the team reach the playoffs for the first time in franchise history, with a record of 20-12.

He was named Sparks head coach in November 1999, and the Sparks' record skyrocketed, as they finished 28-4 in their 2000 campaign. Cooper was named the WNBA Coach of the Year for his efforts. The Sparks followed with two consecutive WNBA Championships in 2001 and 2002, but were denied a third straight WNBA title by losing to the Detroit Shock in 2003.

After the Sacramento Monarchs ended the Sparks' run in the first round of the 2004 WNBA Playoffs, Cooper took a job as an assistant coach under Jeff Bzdelik with the Denver Nuggets. 24 games into the season, Bzedlik was fired, and Cooper was named the Nuggets' interim head coach. He remained interim head coach until George Karl was brought in to coach the team about a month later and served as a scout for the Nuggets the remainder of the season. Most recently, Cooper was appointed head coach of a new NBA D-League team that will play in Albuquerque for the 2005-2006 season.

In 2007, Cooper left the Thunderbirds after coaching them to the NBA Development League Championship in 2006. Cooper has since returned to coaching in the WNBA as the head coach of the Los Angeles Sparks.

In May 2009, Cooper was named the head coach for the University of Southern California's Women of Troy Basketball Team.

Secure Michael Cooper for Your Event

Based on your interest in Michael Cooper as a speaker or for a personal appearance, Direct Sportslink has provided you additional links below for other sports talent with similar appearance fees, speaker topics, and categories that match Michael Cooper.