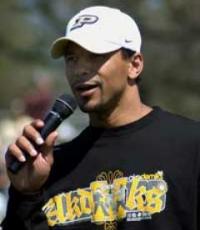 He was a member of the Super Bowl XXXV Champion Baltimore Ravens; He was named the NFL Defensive Player of the Year in 1993
Fee Range: Contact Us
Secure Rod Woodson
for Your Event

Woodson's career took a somewhat nomadic turn after free agency from Pittsburgh. Although he has remained to raise his family in Pittsburgh he has hopped between three additional franchises. Woodson signed with San Francisco for the 1997 season, Baltimore for the years 1998 to 2001 (where he won a Super Bowl), and the Oakland Raiders for 2002 and 2003 (where he appeared in his third Super Bowl). In 2001, after fourteen seasons in the league, Woodson finally got to play on the winning side in Super Bowl XXXV.

For his excellence on the field, Woodson has been named to the Pro Bowl eleven times. Woodson was named 1993's NFL Defensive Player of the Year by the Associated Press. In 1994, he was named to the NFL's 75th Anniversary Team. The Sporting News and College Football News have also honored him as one of the 100 greatest players of the 20th century.

In 2007, Woodson began commentating for the NFL Network. In February 2011, Woodson was hired by the Oakland Raiders to be their cornerbacks coach.

Secure Rod Woodson for Your Event

Based on your interest in Rod Woodson as a speaker or for a personal appearance, Direct Sportslink has provided you additional links below for other sports talent with similar appearance fees, speaker topics, and categories that match Rod Woodson.