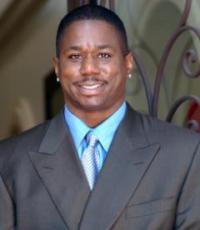 He rushed for over 10,000 yards in his NFL career; He was a member of the National Championship team at Notre Dame in 1988; He was a key member of the San Francisco 49ers Super Bowl XXIX Champion team
Fee Range: Contact Us
Secure Ricky Watters
for Your Event

Watters played college football at the University of Notre Dame where he played wide receiver on the school's 1988 national champion team. He also won a Super Bowl as a member of the 1994 San Francisco 49ers. Watters was known throughout his playing career for his outstanding receiving skills and his unique high-step running style, which earned him the nickname Ricky "Running" Watters.

Watters played for ten seasons in the NFL with San Francisco, Philadelphia, and Seattle. He was selected by San Francisco in the second round of the 1991 NFL Draft, but sat out the entire 1991 season with injuries. He started at running back for the 49ers during the next three seasons and San Francisco's offense led the NFL in scoring and yardage each year. In Super Bowl XXIX, Watters scored three touchdowns in San Francisco's 49-26 victory over the San Diego Chargers, tying a Super Bowl mark shared by fellow 49ers Roger Craig and Jerry Rice, and later matched by Terrell Davis of the Denver Broncos.

Watters joined the Philadelphia Eagles in 1995 as a free agent. He quickly established himself as a very productive player for the Eagles and helped Philadelphia get to the playoffs in 1995 and 1996. In 1998, Watters joined the Seahawks and played with them until his retirement in 2001. He finished his professional career with 10,643 yards rushing and 4,248 yards receiving and 91 total touchdowns in regular season play.

Since his retirement, Watters has been a motivational speaker for kids who, like himself, are adopted. He has also been a recording artist, music producer, President and CEO of Tigero Entertainment and an author, having written the book, For Who For What, a Warrior’s Journey.

Secure Ricky Watters for Your Event

Based on your interest in Ricky Watters as a speaker or for a personal appearance, Direct Sportslink has provided you additional links below for other sports talent with similar appearance fees, speaker topics, and categories that match Ricky Watters.