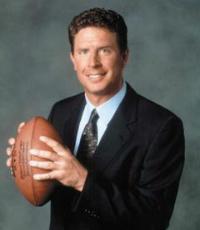 After a stellar high school career, Marino played college football at the University of Pittsburgh from the 1979 to 1982 seasons, leading the Panthers to a Sugar Bowl triumph over the Georgia Bulldogs in Jauary 1982.

The 1984 season would be Marino's best. He threw for 48 touchdown passes and 5,084 yards, both of which shattered previous records. The '84 Dolphins scored an NFL record 70 touchdowns and posted a 14-2 record. In Super Bowl XIX Marino and the Dolphins lost to Joe Montana and the 49ers. This would be Dan Marino's only Super Bowl appearance.

Secure Dan Marino for Your Event

Based on your interest in Dan Marino as a speaker or for a personal appearance, Direct Sportslink has provided you additional links below for other sports talent with similar appearance fees, speaker topics, and categories that match Dan Marino.