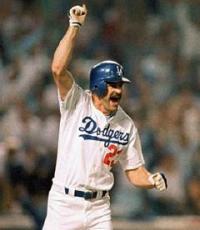 He helped the Detroit Tigers win the 1984 World Series; He hit one of the most memorable home runs in baseball history in the 1988 World Series as a member of the Los Angeles Dodgers
Fee Range: $10,000 - $20,000
Secure Kirk Gibson
for Your Event

Kirk Gibson was born May 28, 1957 and is a former American two-sport athletic star, best known as a Major League Baseball player noted for his competitiveness and clutch hitting. Gibson grew up in Waterford, Michigan and attended Michigan State University where he was an All-American wide receiver in football. He played only one year of college baseball. He was drafted by both the Detroit Tigers baseball team and the St. Louis Cardinals football team, but chose baseball.

Gibson played as the right fielder for the Detroit Tigers from 1983 to 1985. He helped the Tigers to the 1984 World Series championship. In 1988, an arbitrator, Thomas Roberts, ruled that the owners colluded against the players. He ruled that 25 players, including Gibson, were to be immediate free agents. They were free to sign with any team. The Los Angeles Dodgers signed him.

Gibson was known for hitting clutch home runs. In the eighth inning of Game 5 of the 1984 World Series, he faced Goose Gossage, one of the game's premier relievers, in a moment that seemingly called for an intentional or at least semi-intentional walk, with first base open and the game close and Gibson having already homered earlier in the game. If the Padres could hold the Tigers and score a couple in the ninth, they would have a chance to force the Series back to San Diego, and maybe turn the tide of the Series. In a video called "Sounds of the Game", Detroit manager Sparky Anderson was seen in the dugout, yelling at Gibson, "He don't want to walk you!" and making a bat-swinging motion with his hands. Gibson got the message, and launched Gossage's next pitch deep into Tiger Stadium's right field upper deck for a 3-run homer, icing the game and the Series for the Tigers.

In the 1988 World Series against the Oakland Athletics, Gibson saw only a single plate appearance, but it was one of the most memorable and oft-replayed in baseball history. Gibson had severely injured his leg during the League Championship Series. He was not expected to play at all. In Game 1 with the Dodgers trailing by a score of 4-3, Mike Davis on first, and two out in the ninth inning, manager Tommy Lasorda inserted Gibson as a pinch hitter. Earlier, the TV camera had scanned the dugout and Vin Scully (the legendary Dodger announcer who here, was calling the game with Joe Garagiola for NBC) observed that Gibson was nowhere to be found. According to legend, he was in the clubhouse undergoing physical therapy and saw this on the television, spurring him to get back in the dugout and tell Lasorda he was ready if needed. When Gibson received the news that he would pinch-hit, he went to the clubhouse batting-cage to warm-up. Suffering through such terrible pain in his knee, it is said he was wincing and nearly collapsing after every practice swing.

Surprising everyone, Gibson hobbled up to the plate with Scully commenting, "Look who's coming up!" He was facing future Hall-of-Famer Dennis Eckersley, the best relief pitcher in baseball at the time. Gibson quickly got behind in the count, 0-2, but received a few outside pitches from Eckersley to work to a 3-2 count. On the seventh pitch of his at bat, a ball, Davis stole second. The A's could have walked him to face Steve Sax, but chose to pitch to him, just as Gossage had done four years earlier. With an awkward, almost casual swing, Gibson used pure upper-body strength to smack a 3-2 "backdoor slider" just over the right-field fence. He hobbled around the bases and pumped his fist as his jubilant teammates stormed the field. The Dodgers won the game, 5-4.

The home run was so memorable that it was included as a finalist in a Major League Baseball contest to determine the sport's "Greatest Moment of All Time." For years after the fact, it was regularly used in This Week in Baseball's closing montage sequence. An edited audio of Scully's 1988 call has been used in 2005 post-season action, in a TV ad featuring a recreational softball game, with a portly player essentially re-enacting that entire moment as he hits the softball over the right field fence to win the game.

He retired in August 1995. After a stint as a Tigers broadcaster with FSN Detroit, he was named the team's bench coach, and served in that position until the end of the 2005 season.

On July 1, 2010, the Arizona Diamondbacks promoted Gibson from his position as bench coach to interim manager. Shortly after the season, Gibson was named permanent manager and given a two-year contract. In his first full year as manager, Gibson led the Diamondbacks to their first N.L. West title since 2007, when most sports writers expected them to be in last place for the third time in a row. He was named NL Manager of the Year on November 16, 2011. He was fired as Diamondbacks' manager in 2014.

Secure Kirk Gibson for Your Event

Based on your interest in Kirk Gibson as a speaker or for a personal appearance, Direct Sportslink has provided you additional links below for other sports talent with similar appearance fees, speaker topics, and categories that match Kirk Gibson.