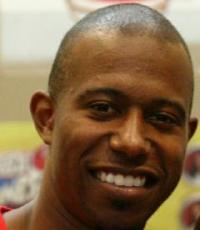 He was the first round pick of the Milwaukee Bucks in the 2003 NBA Draft; He is the first freshman in NCAA basketball history to lead the nation in assists
Fee Range: $5,000 - $10,000
Secure T.J. Ford
for Your Event

A T.J. Ford personal appearance, T.J. Ford speaking engagement, or T.J. Ford endorsement will reflect well on your company. To hire T.J. Ford now for any corporate appearance, fundraiser, motivational speaker event, personal appearance, autograph signing, or website endorsement please contact our celebrity agents at 1-877-6-SPORTS. We will contact T.J. Ford or contact T.J. Ford's agent and provide you with the booking fees and availability immediately upon your request. Direct Sportslink is the only sports speakers bureau and talent booking agency based in the United States securing only sports talent for corporations, associations, and organizations for motivational speaking engagements, personal appearances, and endorsements. We are the premier sports celebrity booking agency and a sports celebrity procurement expert. Accordingly, we will provide you with any relevant T.J. Ford website information and booking agent details so that you can hire T.J. Ford for your next event.

In his first season at Texas, Ford not only led the team in steals and minutes per game, he became the first freshman player in NCAA history to lead the nation in assists (8.27 per game). In 2003, he helped lead Texas to its first Final Four since 1947. To honor Ford, his #11 jersey was retired by his university, making him the fourth University of Texas athlete in any sport (and the first basketball player) to have such an honor, joining Earl Campbell, Ricky Williams, Roger Clemens. Kevin Durant now joins the group.

Having been awarded numerous top basketball accolades in college, Ford entered the 2003 NBA Draft and was selected eighth overall by the Milwaukee Bucks. Ford's recurring back injuries resulted in him missing many games in his three seasons with the Bucks, but in 2005, it was announced that he was fit to play basketball again. Ford was traded to the Raptors prior to the 2006-07 NBA season, and established himself as the starting point guard, helping the team win the Atlantic Division crown and reach the 2007 NBA Playoffs. Following an injury sustained in the 2007-08 NBA season. He was then traded to the Indiana Pacers and averaged almost 15 points a game in 2008-2009.

Off the court, Ford set up the TJ Ford Foundation in 2004 to help participants achieve their academic, personal and civil goals. He retired from the NBA in 2012 due to injuries.

Secure T.J. Ford for Your Event

Based on your interest in T.J. Ford as a speaker or for a personal appearance, Direct Sportslink has provided you additional links below for other sports talent with similar appearance fees, speaker topics, and categories that match T.J. Ford.