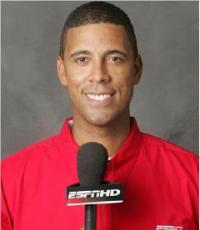 He was a former University of North Carolina All-American college basketball player; He was the #1 overall pick in the NBA Draft (1986 Cleveland Cavaliers)
Fee Range: $5,000 - $10,000
Secure Brad Daugherty
for Your Event

Daugherty was one of the greatest players ever to play at the University of North Carolina. He entered college as a 16 year old freshman and was a two-time ALL-ACC first team selection, and a first team All-American in 1986. Brad was named to the ACC basketball All-Time team in 2002 and was inducted into the North Carolina Sports Hall of Fame. Brad averaged more than twenty points per game in his senior season with the UNC Tar Heels.

Brad was taken as the first pick by the Cleveland Cavaliers in the 1986 NBA Draft. Daugherty averaged nineteen points and ten rebounds per game over eight seasons in the NBA and retired as the Cavaliers all time leading scorer (10,389 points) and rebounder (5,227). He played in 41 postseason games and led the Cavaliers as far as the Eastern Conference Finals in 1992. Brad was a five time All-Star (1988, 1989, 1991, 1992, 1993) and one of the greatest players in Cleveland Cavalier history. As part of the Cavaliers 30th Anniversary in 1999-2000, Daugherty was a unanimous selection to the All-Time Cleveland Cavalier team.

He announced his retirement after the 1995-96 season. His #43 jersey, a number he picked as a tribute to NASCAR legend Richard Petty (who Daugherty lists as his favorite sportsman), was retired by the Cavaliers on March 1, 1997.

His business interests include car dealerships and commercial real estate. He has also been a college basketball analyst and NASCAR broadcaster for ESPN. He is active in many charities including hosting the Presbyterian Home for Children's annual golf tournament, which raises money in support of the home, located in Black Mountain. He also has sponsored an annual scholarship to help a child from Presbyterian Home receive a higher education. At UNC , he has given to the Sonja Haynes Stone Center for Black Culture and History and has served on the Board of Visitors and the athletic council of the General Alumni Association Board. He has also served with Andie McDowell as co-chair of the fundraising campaign for the Asheville Humane Society's new animal adoption and education center.

Secure Brad Daugherty for Your Event

Based on your interest in Brad Daugherty as a speaker or for a personal appearance, Direct Sportslink has provided you additional links below for other sports talent with similar appearance fees, speaker topics, and categories that match Brad Daugherty.