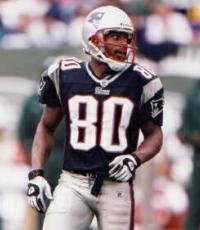 He played on three Super Bowl winning teams and has been named Sports Illustrated Sportsman of the Year
Fee Range: $10,000 - $20,000
Secure Troy Brown
for Your Event

A sensational all-around player at Marshall who was considered the most dangerous scoring threat in all I-AA football during his final two seasons (1991-92). He averaged a touchdown every eight times he touched the ball. Brown tied the NCAA record for the most touchdowns on kick returns in a single season with four and became the NCAA's all-time leader in kickoff return average with a regular season net of 29.69 yards per return (32 for 950 yards). He ranks eighth all-time for all-purpose yardage, averaging 148.3 yards per game.

Brown was drafted by the New England Patriots out of Marshall University and made his NFL debut in 1993. He had a good season in 1997, despite not being a full-time starter. His first year as a starter was 2000, but his best year wouldn't come until the next year, when he, alongside Tom Brady, led the Patriots to their first ever Super Bowl championship.

Troy became the first Patriot in club history to record three 80-catch seasons, he also passed Irving Fryar to become the Patriots all-time leading punt returner. He moved into third place on the Patriots all-time receiving list with his 364th career reception.  Brown earned his first trip to the Pro Bowl following the 2001 season and became just the third Patriots wide receiver to be selected to the Pro Bowl since 1970. Brown established a franchise record with 101 receptions during the 2001 season. Brown is the Patriots all-time leading receiver in the postseason with 25 catches and 337 yards during his nine postseason games.

Secure Troy Brown for Your Event

Based on your interest in Troy Brown as a speaker or for a personal appearance, Direct Sportslink has provided you additional links below for other sports talent with similar appearance fees, speaker topics, and categories that match Troy Brown.