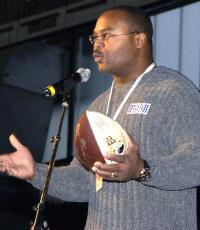 While with the Bears, Singletary was known as "The Heart of the Defense" for the Monsters of the Midway in the mid-1980s. "Samurai Mike" was also nicknamed "The Minister of Defense" since he was ordained a minister during his career with the Bears.

An intense player, Mike finished as the Bears' first or second leading tackler each of his last 11 seasons. He amassed an impressive 1,488 career tackles, 885 of which were solo efforts. A constant force on defense, he missed playing just two games, both in 1986.

Singletary was named NFL Defensive Player of the Year by the Associated Press in 1985 and 1988. He was elected to the College Football Hall of Fame in 1995 and to the Pro Football Hall of Fame in 1998. In 1999, he was ranked number 56 on The Sporting News' list of the 100 Greatest Football Players. Selected to play in a team record 10 Pro Bowls, Singletary was All-Pro eight times, and All-NFC every year from 1983 to 1991.

In addition to his coaching duties for the 49ers, Singletary is a motivational speaker and has authored three books; Singletary One on One, Calling the Shots, and Daddy's Home at Last.

Secure Mike Singletary for Your Event

Based on your interest in Mike Singletary as a speaker or for a personal appearance, Direct Sportslink has provided you additional links below for other sports talent with similar appearance fees, speaker topics, and categories that match Mike Singletary.